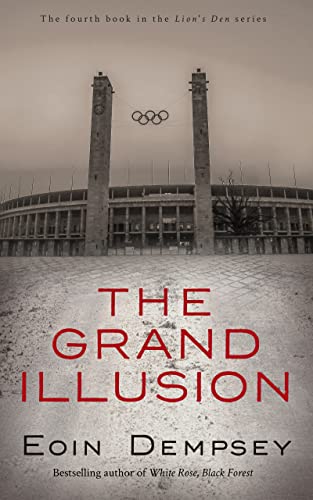 A Family Drama in Hitler's Berlin in the 1930's

Berlin 1936—the Grand Illusion has begun.

With the coming of the Olympic Games to Berlin, a false air of civility has taken over as the government extends a welcome to the world. But below the surface, the police state remains, and hundreds of so-called “undesirables” are rounded up and held in a newly constructed concentration camp in the city. In desperation, one of the prisoners reaches out to the Ritter family, and Maureen and her band of subversives will undertake a mission of mercy that could see them all end up as victims of the dreaded Gestapo.

When one of his old war buddies appears in Berlin, Seamus Ritter realizes it’s no coincidence. Soon, he will be enlisted to infiltrate the Nazi establishment and report back to the Americans on the Nazi progress in building the most advanced war machine the world has ever known.

Michael Ritter’s dream has become a reality as he prepares to compete in the 100 meters against the seemingly unbeatable American, Jesse Owens. But at a lavish party on the eve of the games, he meets a beautiful stranger who could upend his life and change his fate.

THE GRAND ILLUSION is the fourth novel in a new series by the #1 Amazon bestselling author of WHITE ROSE, BLACK FOREST, and THE LONGEST ECHO, set in Hitler’s Germany in the 1930s. Download it and discover Eoin Dempsey’s books today.

“This is such a pertinent and moving series. Makes one remember the history of the war and the horrors of Nazi Germany. Puts it all at the level of real people trying to lead regular lives under extraordinary circumstances.” – Amazon reviewer

“The Olympics are being held in Germany and Hitler is putting on a show for the world to see what a wonderful place Germany is. But behind the scenes, this monster is continuing to try to rid Germany of what he perceives to be undesirable people. Seamus and his cousin Helga have turned the factory into an armament manufacturer. Michael’s dream of running in the Olympics is fulfilled. Maureen is involved in the resistance while her younger sister has been brainwashed by the League of German Girls. The period between WW I and WW II are every bit as scary. I will state two quotes from the book and let you form your own opinion. “The tactics used to control the media are working. When lies aren’t questioned anymore, the truth ceases to exist.” “What chance does a youthful impressionable mind have against the onslaught of propaganda young people are subjected to these days?” I look forward to more in this series.” – Amazon reviewer

“I loved this series of books! Great storyline. I’d love to read how the estory continues with Seamus and his family during the remaining years under the Nazi reign.” – Amazon reviewer