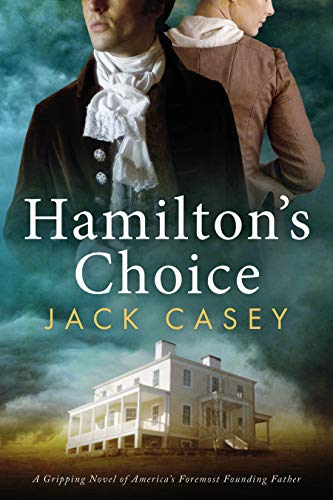 He never intended to send his son to his death. That wasn't in his plans. And his wife may never forgive him.

He never intended to send his son to his death.
That wasn't in his plans.
And his wife may never forgive him.

Tortured by a secret so shameful that it is beyond bearing, Hamilton is alone in his grief. His heir is dead; his daughter has gone insane with grief. His dear wife, Eliza, now shudders at his touch.

As Hamilton struggles to save his marriage and his family, his political opponent, Aaron Burr, threatens to topple the nation. The nation which Hamilton had risked everything to forge.

Burr, impoverished and embittered by a humiliating loss, blames Hamilton. Burr will stop at nothing to regain his lost power and restore his fortunes. If he can destroy and defame Hamilton in the process, he will have his ultimate triumph.

It is a time of honor, duels, political intrigues, and political violence.

Torn between his duty to his wife and family, and his allegiance to the country, Hamilton must make his choice.

You know his name, but this is the story that you haven't heard before! If you loved the score of Hamilton, the biographies of Chernow, and the novels of Stephanie Dray - you would love Hamilton's Choice!