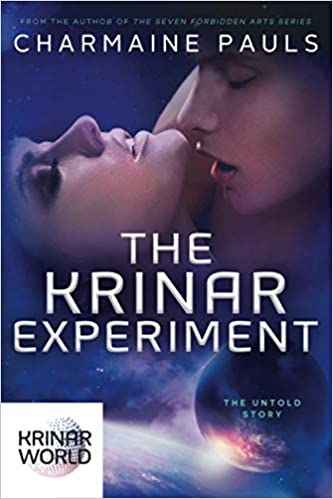 When Drako's space pod malfunctions over Johannesburg, his secret reconnaissance mission goes horribly wrong. Wounded in the crash, he's captured by the South African Secret Service who sees an opportunity to strengthen their army and make a fortune by using the alien pilot in an unorthodox experiment.

When Drako's space pod malfunctions over Johannesburg, his secret reconnaissance mission goes horribly wrong. Wounded in the crash, he's captured by the South African Secret Service who sees an opportunity to strengthen their army and make a fortune by using the alien pilot in an unorthodox experiment. They send a female to tend to Drako's injuries, a human girl with the pretty name of Ilse who's sweet and caring. The perfume of her skin is like a drug, her blood an aphrodisiac.

He can still smell her and taste her on his tongue.

Her betrayal cuts deeper than the testing and torture. No matter. His escape is pending. When he comes back to Earth, it will be to find her, and when he does, he'll show as little mercy as she did. These are the events that led to the Krinar Earth Invasion. This is the untold story.

* This is a standalone story that plays off in Anna Zaires' Krinar World with the author's permission. You don't need to read the original Krinar Chronicles to follow the story, but it's highly recommended for character insight and reading enjoyment.

Readers LOVE this Sci-fi Alien Romance! See what they have to say about The Krinar Experiment:

"Wow! Just wow. What a powerful story. Great plotting and story line. Charmaine Pauls did an awesome job at bringing the story to life; it felt real and believable as I was reading it." Cara Bristol, Goodreads ⭐⭐⭐⭐⭐

"Another great story from the author and what a surprise... a standalone plot from the Krinar world!! I really enjoyed it, it was fresh, adventurous and captivating combined with very lovable characters." Nicole, Goodreads ⭐⭐⭐⭐⭐

"Take one sexy nurse with a heart too pure for her own good and one lost alien far from home on a secret mission that will determine the fate of earth. What you get is a great and sexy love story by Charmaine Pauls." Shilgiia Mehagdot, Goodreads ⭐⭐⭐⭐⭐

"Charmaine Pauls definitely did justice to the Krinar World. Her style of writing was very similar to Anna Zaires' in this story.The romance was hot and the suspense moved the story right along. I couldn't put it down." Lynda, Goodreads ⭐⭐⭐⭐⭐